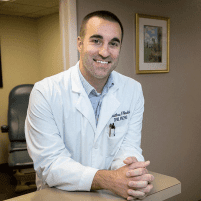 Up to 12% of Americans have nail fungus, with most cases occurring in the feet. At Cedar Grove Foot & Ankle Specialists, skilled podiatrist Matthew Wachtler, DPM, fights toenail fungus using scientifically proven gentle techniques and then helps you prevent a recurrence. Book your appointment by calling the Cedar Grove, New Jersey, office, or click the online scheduling tool.

What is nail fungus?

Nail fungus is a fungal infection that usually starts beneath the nail plate of your big toe. It causes problems such as:

Fungal nails aren't usually painful, but they can be very uncomfortable when you're wearing shoes. Usually, nail fungus starts in one nail, but without treatment, it can spread.

The dermatophyte fungus causes most cases of nail fungus. That same fungus also causes athlete's foot, which occurs on your skin. Less commonly, yeast and certain types of molds can lead to nail fungus.

Nail fungus can occur in anyone, but incidence doubles in adults over 60. That may be because nails weaken as you age, and tiny cracks are an ideal entry point for fungi.

Fungi thrive in warmth and humidity, which is why you should avoid wearing damp socks and walking barefoot in public areas. Though rare, it's also possible to get nail fungus from others, through direct foot-to-foot contact or by sharing tools like nail clippers.

If you have an immune condition, like diabetes, you're more likely to develop nail fungus since you can't fight the infection effectively. Some cases of nail fungus begin as athlete's foot, which usually appears between the toes or in other parts of your foot.

How is nail fungus diagnosed?

Dr. Wachtler examines your foot and nails carefully. He may scrape the infected nail lightly to gather cells for testing. Verifying the specific fungus may guide your treatment protocol.

Usually, Dr. Wachtler can diagnose your nail fungus and start your treatment immediately to ease your symptoms quickly.

How is nail fungus treated?

In cases of severe nail infections that don't improve with conservative care, Dr. Wachtler may recommend nail plate removal so he can treat the skin directly. Following treatment, your new nail can grow back clear, strong, and fungus-free.